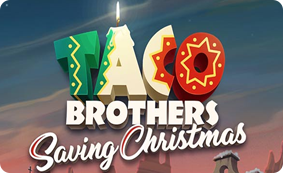 If you were a fan of the old Taco Brothers slot, odds are that ELK Studios’ newest release will entice you. Taco Brothers Saving Christmas comes out just in time for the holiday seasons, as you aid the trio to save the holiday from the evil clutches of Captain Diaz. With multiple interesting specials, this 5 reel, 243 payline game will leave both iOS and Android players spinning in hopes winning the love of the Senorita and retiring after stopping the dastardly Captain Diaz from his dark scheme.

ELK Studios’ winter release doesn’t stray too far from what sort of symbols you’d expect in a slot about Mexico. Lower paying icons form a bottle of tequila, a guitar, a cactus and a shovel, all with a bit of holiday cheer tossed on top of them to make this into a Christmas game. Higher paying symbols include our three charming brothers – Pico, Pepe and Paso giving you the most bang for your buck.

As far as special icons go, there are several which will make their appearance. Wilds come as golden bells, and Scatters appear as safes wrapped up in a bow. Wilds can replace any other icon except the Scatter, and Scatters have the ability to activate the free spins mode. In this free spins mode, we have the appearance of Captain Diaz and Senorita, which have a role to play in how the bonus round flows.

Thanks to the well done user interface, ELK Studios’ release has a charming set of visuals that aren’t hidden behind clutter, nor do you have the rest of the screen distracting you. All the options are set aside, which you access by tapping on the icons.

The slot allows you to adjust your coin value, which can range from $0.10 up to $50, and it also allows you to set betting strategies.

This creates a bit of a unique spin to the gameplay, as you ‘advance’ through bet levels. It is an interesting idea, but it does not change enough to really warrant being anything but a novelty feature.

Taco Brothers Saving Christmas actually has two types of Wilds. The first is standard, which replaces all other symbols. The second Wild is the Taco Brothers Wilds. Two of these Wilds will activate a respin, which gives you another chance at getting the Scatters.

This game is not progressive, but the potential for large wins is there. It mostly comes from the specials, as by itself, the largest icon in ELK Studios’ release comes out to be only x400 what you wagered, and that is if you get five of them in a row.
As such, the free spins and the Wilds will be instrumental in chaining wins to reach the heights. However, don’t soar too high, as the slot limits your winnings at $150,000.

Three or more Scatters will activate a special bonus game called the Wild Escape. The brothers will become Wilds, and appear on reel 5. Here is where the free spins come into play, as you have to move all of them to reel 1, at which point you win and the free spins end.
As an obstacle, you have Captain Diaz – appearing on the reel in front of one of the brothers, he can lock them up in prison. To save them, another symbol appears. The Senorita will not only restart your Wild Escape, giving you a bigger chance at scoring a large win with free spins, but also releases any imprisoned brothers.

Planet of the Apes


32 Red is a well known company that offers a variety of gambling services online. While they firstly launched as a UK based sportsbetting company, due to gaining more popularity, they excelled their offerings to casino, bingo and poker. Recently the trend of mobile gambling was also picked up and 32Red Mobile Casino was born. Powered by MicroGaming and with over a dozen of games offered, it’s a great choice without a doubt.

Spin3, which is a sister company of MicroGaming, is used to offer a casino environment that is mobile friendly. Players will have a chance to play a dozen of high quality gambling games, directly from their mobile phones. A couple of featured titles include ThunderStruck and the well known progressive game, Mega Moolah. The latter makes 32Red stand out, as there aren’t all that many casinos that offer a chance to become a millionaire overnight by only using your mobile device!

There’s another pretty big perk for choosing this brand, and that’s the range of products offered. You won’t be limited to only playing casino games, but will also have a chance to bet on sports, play bingo or poker as well as live dealer games. All of that won’t require several accounts, but rather will be available from a single account.

Be a Spin Star at Mr Green and Pocket Free Spins - The dance floor is waiting for you at Mr Green Casino, where only the best of dancers will get their share of the reward in May. Every single day, you [...]
A Total of €750 Extra Cash Given Away Daily By 888 Casino - Fans of Live Casino Blackjack tables will be pleased to know that every single day 888 Casino is giving away a total of €750 to their loyal followers. Sit at [...]
Mr Green is Giving Away 200 Cash Prizes - You can now battle with other players for a chance to win one of 200 cash prizes on the offer at Mr Green. Do not worry, you are not obliged [...]