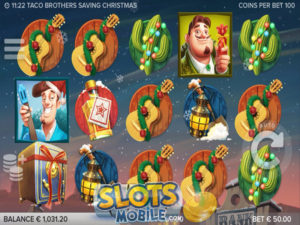 As first Christmas decorations start to appear on streets and squares of cities around the world, game developers are getting ready to dish out a new portion of holiday-themed slots. But while we’re waiting to see which new toys we’ll get to play with over the next couple of months, let’s not forget the best of those already available. Top 5 Christmas-themed mobile slots are just the thing to put you in holiday mood before Christmas frenzy takes over the world, and who knows, they might even provide a welcome contribution to this year’s holiday budget. Give them a try and have yourself a very merry Christmas.

Secret Santa from Microgaming is everything you’d expect a Christmas slot to be – visually festive with the music background to match, and above all, exceedingly generous. Realistic looking turkey and Christmas pudding might make your mouth water while landing on the reels along prezzies, appropriately decorated fireplace, Christmas tree and Santa himself. The 1,024-way slot comes with randomly triggered Secret Santa Bonus which awards one of 7 Mystery Features: one which will turn up to 3 reels completely Wild, another that will transform a random symbol into Wild icon, Free Spins with all wins tripled, a multiplier boosting the prize by up to x10, Dashing Wilds landing in random positions, all symbols paying like Scatters, or Rolling Reels which increase the multiplier with each successive win. On top of all this, scoring a 5-of-a-kind win will get Secret Santa to replace winning symbols by another and deliver a second 5-of-a-kind combo completely free of charge.  How’s that for a Christmas present?

Playtech’s Christmas issue was inspired by famous Charles Dickens novel called A Christmas Carol. In the novel, the ghost of Ebenezer Scrooge’s business partner wanders the Earth chained by greed and selfishness which we exhibited during his entire life. On Christmas Eve Marley’s ghost comes to see the Scrooge, warn him of the imminence of suffering the same fate, and announce the visit of 3 spirits. Ghost of Christmas Past, Ghost of Christmas Present and Ghost of Christmas Yet to Come will appear to remind him of people he cared for and give him a glimpse into his grim future. You’ll see all these characters in Playtech’s take of this well-known story. Marley will show up to offer free games with all wins tripled, while Ghosts of Christmas Bonus randomly awards one of 3 bonus rounds – Christmas Past, Present or Future. All three are pick-and-click affairs taking place in different environments and awarding cash prizes. This lovely execution of Dickens’ classic makes the old miser very generous as he acts as substitute and pays as much as 10,000 coins.

Elk Studios have milked the success of the original slot by producing its Christmas-themed version which, while not all that different in terms of mechanics, is still a wonderful game with creative features. It’s snowing in the village of Santa Maria where the familiar siblings, Paso, Pepe & Pico, go head-to-head with evil Captain Diaz once again, while lovely Senorita offers a helping hand. Two Wilds will activate a re-spin to give you a second chance of landing the elusive third Safe, needed for launching highly entertaining Wild Escape Bonus game. During the free spins, Taco brothers will be dropping on reel 5 one after another, releasing Running Wilds which will move to the left one reel per spin. Capt. Diaz symbol will stop their progress by getting them imprisoned, but the Senorita has the keys and can get them freed. Each time she appears, she’ll also re-start Running Wilds and grant additional free spins. With all this action going on, Wild Escape can continue for quite a while and accumulate a nice little sum, especially when prizes get boosted by the Exploded Safe multiplier.

Visually and in terms of audio, NetEnt’s Secrets of Christmas are as Christmassy as can be. Frosted window decorated by holly creates an appropriate setting for reels which you’ll see populated by Christmas stockings, gingerbread houses, bells, candles, and cookies and milk served for the anticipated midnight visitor dressed in red. Wild Santa can randomly appear anywhere on the reels and sub for all except Scatters. You’ll need 3 or more of the latter to land anywhere in order to activate 10 Free Spins, but before they start, a pick-and-click Bonus game will determine which extra bonus feature you’ll get to play with. One can either win additional spins to those initially claimed, get reels 2 and 4 to go completely Wild, score multipliers or additional Wild symbols. Use these gifts well and you could be walking away with as much as 350,000 coins in your pocket.

5. Swindle All The Way

Realtime Gaming was the first to announce their 2017 holiday edition, which in fact has yet to be released. Why is it on the list? Because the trailer and information currently available indicate it will be a fun game which could see you ho-ho-ho-ing all the way to the bank. Playing over 5 reels and 20 flexible paylines, Swindle All The Way features two cheeky robbers trying to steal Christmas cheer. There’s plenty of tools to make their loot become yours, including Wild robbers substitute and Scatter-triggered Free Spins which will send you in search of the burglars. There’s 2 of them hiding behind windows on every reel, and you’ll get to open 1 or 2 per each. Try to find as many as possible because their number, in combination with number of Scatters, not only determines how many times you’ll get to spin on the house, but also influences your free games multiplier. Eventually, you could be spinning for free up to 60 times while getting all prizes multiplied by as much as x33. Like many other RTG slots, this one also comes with 2 randomly-awarded progressive jackpots which could be yours after any of the spins.


32 Red is a well known company that offers a variety of gambling services online. While they firstly launched as a UK based sportsbetting company, due to gaining more popularity, they excelled their offerings to casino, bingo and poker. Recently the trend of mobile gambling was also picked up and 32Red Mobile Casino was born. Powered by MicroGaming and with over a dozen of games offered, it’s a great choice without a doubt.

Spin3, which is a sister company of MicroGaming, is used to offer a casino environment that is mobile friendly. Players will have a chance to play a dozen of high quality gambling games, directly from their mobile phones. A couple of featured titles include ThunderStruck and the well known progressive game, Mega Moolah. The latter makes 32Red stand out, as there aren’t all that many casinos that offer a chance to become a millionaire overnight by only using your mobile device!

There’s another pretty big perk for choosing this brand, and that’s the range of products offered. You won’t be limited to only playing casino games, but will also have a chance to bet on sports, play bingo or poker as well as live dealer games. All of that won’t require several accounts, but rather will be available from a single account.

Be a Spin Star at Mr Green and Pocket Free Spins - The dance floor is waiting for you at Mr Green Casino, where only the best of dancers will get their share of the reward in May. Every single day, you [...]
A Total of €750 Extra Cash Given Away Daily By 888 Casino - Fans of Live Casino Blackjack tables will be pleased to know that every single day 888 Casino is giving away a total of €750 to their loyal followers. Sit at [...]
Mr Green is Giving Away 200 Cash Prizes - You can now battle with other players for a chance to win one of 200 cash prizes on the offer at Mr Green. Do not worry, you are not obliged [...]